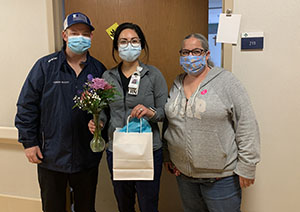 It was a normal Saturday recently for the Davis family from Topeka. Scott Davis and his wife Jessica were in Kansas City for their sons’hockey matches. Scott is the coach and between their sons’ sporting activities and daughter’s dance participation, they lead a busy life. On their way home from the hockey match, Scott became ill. His chest hurt, his hands were tingly, and he was grasping at his chest.

After checking in with a loved one on the phone, they decided that Scott should be seen by a doctor so they went to a local Urgent Care facility that immediately told them to get to Providence, the closest Emergency Room with a Cath lab in the western part of Kansas City.

“My husband wanted to stop and get some Tums and told me his chest hurt,” described Jessica. “We decided he needed immediate care and were directed to Providence.”

When Scott arrived at the hospital, a medical team quickly assessed his vital signs in the Emergency Room, then sped him to the hospital’s Cardiac Catheterization Laboratory.

Scott was having a major heart attack with a major artery on the left showing 100% blockage and the widow maker’s artery in front of the heart showing 90% blockage. Venkat Pasnoori, MD, Interventional cardiologist, placed the two stents necessary to open Scott’s clogged arteries.

“We have such a great team here at Providence,” said Dr. Pasnoori. “Our team assembled quickly and was able to rapidly and efficiently care for Mr. Davis which resulted in saving Mr. Davis’ life.”

The Topeka couple have four children, one daughter and three sons. She and two of her sons were with Scott at the time of his chest pain. She said initially the family could not be with him in the ER during the early diagnosis due to COVID-19 visiting restrictions, but a certain nurse, Julia, kept them very informed.

As it was decided that Scott needed to go to the Cath lab for a procedure, Julia worked with the doctor so the family could speak with Scott briefly. She even visited with them the next few days to follow up when he was an inpatient.

“Everything happened kind of quickly,” said Scott. “After my procedure I woke up in an ICU bed where a nurse named Sharon took good care of me.”

Jessica added, “Sharon was a great nurse and a great teacher who helped us learn about Scott’s heart and what was done to save his life.”

Did You Know Heart Attacks Have Beginnings?

Like many people, Scott’s body tried to tell him he was going to have a heart attack, but he was unsure. In fact, more than 50 percent of people have these warning signs, which include:

Remember, people may or may not experience any or all these symptoms. These symptoms may come and go until finally becoming constant and severe.

Eight five percent of heart damage occurs within the first two hours of a heart attack. That’s why acting on these warning symptoms and calling 911 can be crucial to saving precious heart muscle before damage occurs.